Eighth-grader Sandra Parks’ essay about senseless gun violence in her home city of Milwaukee and across the United States and the effects it has on children earned her the third position in her school district’s Martin Luther King Jr. essay contest.

Two years down the line, she unfortunately and tragically fell victim to the same thing she was campaigning against; gun violence.

According to WISN, Parks’ was hit by a stray bullet while watching TV in her home after several shots were fired at a nearby house.

“She took it like a soldier,” her sister, Tatiana Ingram told WISN-TV. “She just walked in the room and said, ‘Mama, I’m shot.’”

There was, however, a breakthrough on Wednesday when it was reported that two men had been charged for her murder.

Sometimes, I sit back and I have to escape from what I see and hear every day. I put my headphones on and let the music take me away. I move to the beat and try to think about life and what everything means. When I do; I come to the same conclusion … we are in a state of chaos. In the city in which I live, I hear and see examples of chaos almost every day. Little children are victims of senseless gun violence. There is too much black on black crime. As an African-American, that makes me feel depressed. Many people have Lost faith in America and its ability to be a living example of Dr. King’s dream!

Our second truth is that we need to have purpose. We are the future generation, therefore we must have an education to make a positive difference in the world. We are the future leaders, but if we don’t have an education, we will accomplish nothing. We will overcome, when we use our education to make the world a better place. We will become the next President, law enforcement officers, teachers, doctors, lawyers, and lawmakers. We cannot continue to put the responsibility on other people. It is our responsibility as future leaders!

We must not allow the lies of violence, racism, and prejudice to be our truth. The truth begins with us. Instead of passing each other like ships in the night, we must fight until our truths stretch to the ends of the world. 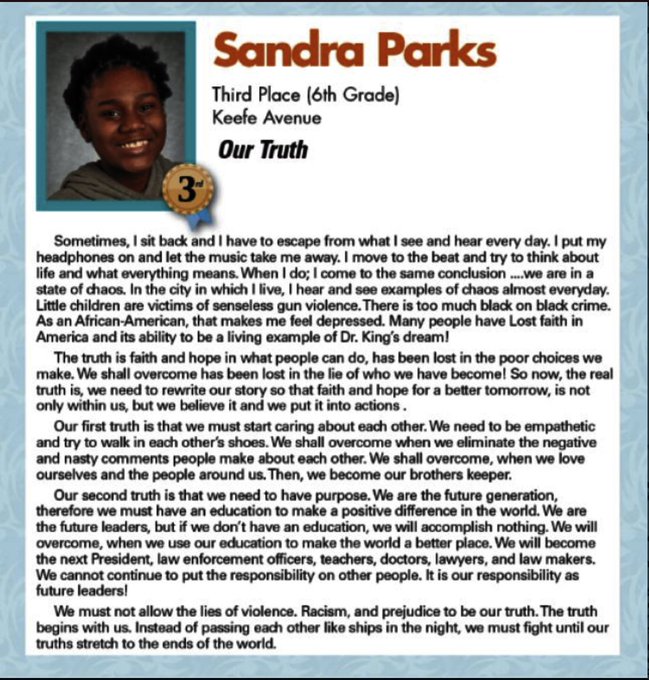 sandra parks, an 8th grader at Keefe Avenue was shot and killed by a stray bullet, in her own home, here in Milwaukee. she participated in the Dr. Martin Luther King, Jr writing contest and won.

The topic of her essay was gun violence.

3,579 people are talking about this