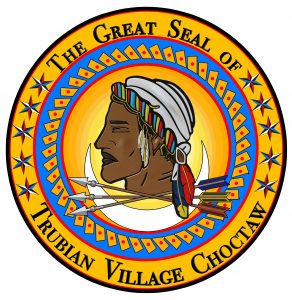 There are four classes of chief’s, House Chief, Clan Chief, Tribal Chief and National Chief . In our custom when a woman and man have a child, both parents become “House Chiefs”. When a woman and man become grandparents both grandparents then become Clan Chiefs. Tribal Chiefs are bloodline related that sit over two or more family clan’s of the same bloodline. Tribal Chief are elected by clan chiefs within their own bloodline, which both clan chiefs and tribal chiefs together make up the legislative branch of the tribal government. The National Chief, is the chief of chiefs among the chiefs of the Trubian Village Choctaw Tribal Nation. The communities Council of Elders are comprised of the grandparents of a tribal bloodline.

Childbirth is seen as a family spirits reentering earth. The journey from the spirit world to the physical world is seen as the first initiation into the family bloodline fraternity. From the act of coming into the world there is a welcoming ceremony where the child is given the family groups bloodline fraternity name. A second and more personal name is also given to the child based on the child’s birth chart, which can be given to the child at the ceremony or shortly thereafter.

Marriages are seen as the launching of a new tribal state under the tribal government, therefore the ceremony consist of the official launching of a new family state and the crowning of new chiefs as the authority of that state. Families are the cornerstone of our tribal nation. Also the institution of marriage is seen as a business empire, therefore the institution is officiated through a business contract where as both husbands and wives have equal shares within the family business organization.

Monogamy and polygamy are the two forms of  marriage within our tribal institutions. Both forms of marriage each participant has equal shares in the family wealth. Shares of the family can not be bought or sold, they are inherited through family bloodline only.

Divorce is not promoted or encouraged, it's something that is seen as a community tragedy. Divorce only take place under extreme circumstance, by a marriage being seen as a tribal state government, husband and wife have the responsibility of tribal state officials and are held to the official tribal state stands. Extreme conditions that constitute reasons for divorce, family treason, embezzlement and physical abuse.

The Doctrine Of The Divine Human Soul

The Cycle Of Life On Earth

Through birth a spirit is cloth in flesh creating the god-man or spirit-man. Within this process there are three natural stages of conscious evolution. The first stage, as a spirit is born the conscious focus turns outwardly in order to adapt to it's new physical environment. In this outwardly focus the illusion is created that the spirit-man is human. Human in this context is defined by a state of consciousness which is marked by the awareness of only the physical self and not the spiritual self. Now the nature of the physical self is defined as the beast and ruled by natural instinct, creating the law of survival of the fittest. In this first stage of consciousness the spiritual consciousness is dormant until the physical body has matured. Once the physical body has reached a certain level of maturity, the second stage of consciousness begins to evolves as the spirit begins to awaken from it's dormancy. This is marked by different levels of intuition. Intuition is spiritual awareness, spiritual awareness comes from the infinite pool of divine wisdom, knowledge and understand. The first stage is marked by physical growth, the second stage is marked by mental growth. The mind is the key to unlocking the door of spiritual bondage of the mental illusion that we are only flesh and blood beings. The third stage is marked by spiritual awareness, the awakening of the god-man or spirit-man as ones true identity that exist in the flesh. This is called being born again.

As the spirit-gods begin to inhabit the Earth, a natural family caste system was established. This caste system was based on the natural evolution spirit-gods go through as they came to Earth. First they would be cared for by their biological parents while their bodies are developing, during this time they would learn about how to maintain and use their physical bodies, social customs, community etiquette and values along with spiritual beliefs, ideas and concepts.

Puberty marks the second level of learning which are labouring skills. After learning their family trade they would then go to work as a family indentured servant. After serving ones family obligation, one would then embark on building one's own family and further ones spiritual awakening.

Human cultivation is about the social order of human labor. In order to build a community of people with social institutions and buildings you need human labor with a diversity of different skills. This is done through a social cultural education system whereas a cultural society trains it's members through it's customs, ritual, ceremony  and traditions.

Tradition is the vehicle in which customs are passed from one generation to the next. Rituals and ceremonies are a cultural way to instill and re-enforce social unity, values, etiquette  and collective purpose, all of  which connects the past present and future of a people through it's reoccurring actions.

Customs are the way a people do thing's which in most case stems from one's natural environment such as terrain. Terrain determines the natural resources people have access to, such as building materials and food just to name a few.

Terrain also impacts a people psychological condition. For example, if a people live in a dangers environment whereas the living conditions are very harsh, difficult and challenging, their mindset and focus would be very different from a people who live in a more pleasant atmosphere such as fertile ground, plenty of natural clean water, and abundance of natural eatable vegetation.

The Trubian Village Family Land Project is designed to build family stability and prosperity through the development of our own natural resources. True freedom requires that you have your own land as a source to not only sustain yourself from, but to build from. By having our own land we can build our own townships, villages, produce our own cultural products and system of cultural commerce to collectively enhance the continual advancement of our families.

Bloodline is the sequence and doorway that we, the spiritual children of Truth have entered the Earth through birth. The woman is our doorway to Earth, thus she is to be protected preserved and cherished. Respect and homage is due to the Great Architect of the Universe and to those who have proceeded us to the Earth which has made our travel and passage possible.

Now let's look at this, as we come to Earth we come through a Bloodline of those who have proceeded us. This bloodline translates into a family fraternity of people on the ground. The condition of this bloodline institution dictates our experience on Earth. Earth is a place where Spirit comes to grow through experience. Fundamentally if you enter a family who is well educated and endowed with material means your experience will be far different then entering a family in oppressive and impoverished conditions. So if you strip away all religion and just look at life as a spiritual ladder, birth is when you come down the latter to enter the earth plane, and death is going up the latter leaving the earths plane, we can then process our duties. It's the job and duty for every man and woman that enters into the earth through the sacred bloodlines of their Ancestors to create a healthy and productive homestead on earth for all who enter the earth through their family bloodline. The homestead of the family bloodline on earth must position itself to govern it's own affairs, space and territory for it's own survival and needs on earth.

Rural land is strategically purchased all throughout North America to serve our community needs, interest and purpose. After land is purchase, no land can be sold or leased to any non-bloodline tribal member. All tribal lands are for the purpose to serve the needs of tribal members. All tribal lands are place under the jurisdiction and authority of the Trubian Village Tribal Trust.

Family must be the new law, regardless what you think, believe or feel there is a Divine Order, Law & Covenant given to every Bloodline on earth. Some of us come to earth and create our own branch by producing seeds (Children) some of us produce big family branches while other small family branches, now the key is neither large or small but constant eternal and forever. Some branch brake off and die while others brake off and take root. Some trees grow above ground while others grow beneath the ground  and yet still others grow both above and beneath the ground. All trees have roots and without roots life for a bloodline tree would not be.

We must dispel the notion that our Spirit Life begins at our physical birth and ends at our physical death. Our physical birth into this World as flesh & blood Hue'man Being was just a transformation of life through a bloodline Covenant of obedience to the Divine Universal Laws of Nature. Everything in Creation has a nature which governs it's very existence. The word Nature lintels a design with a system that has a  proper working order. Thus to work a thing against it's nature will ultimately destroy it. Family has a natural design and a proper working order that must be followed in order to maintain it's existence on Earth. This is the doctrine and science of the Trubian Village Bloodline Fraternities:

The human soul is the vehicle of the Great Spirit.

As the Earth congealed into a life form the Woe'man emerged as the Goddess Mother, Great Mother Goddess of Earth. The Woe'man is mentality, physically and spiritual one with the Earth and is the gatekeeper thereof. The woman's womb is the spiritual gate to the Earth that we as spirit must all travel through to come into the  Earth. In the beginning Earth was inhabited by women who without man gave birth to themselves. The Divine Mother of Ancient instinctively, intuitively knew how to conjure the divine spark that impregnated her. In those days of Ancient the diet was only of the garden, plants, fruits, nuts, berries and all that which was sacred to eat. In the day of the Ancient Goddess Mother, Woe'man dwelt and lived as Conscious Spiritual Beings in the state of harmony with Nature, the Gods of Ancient.